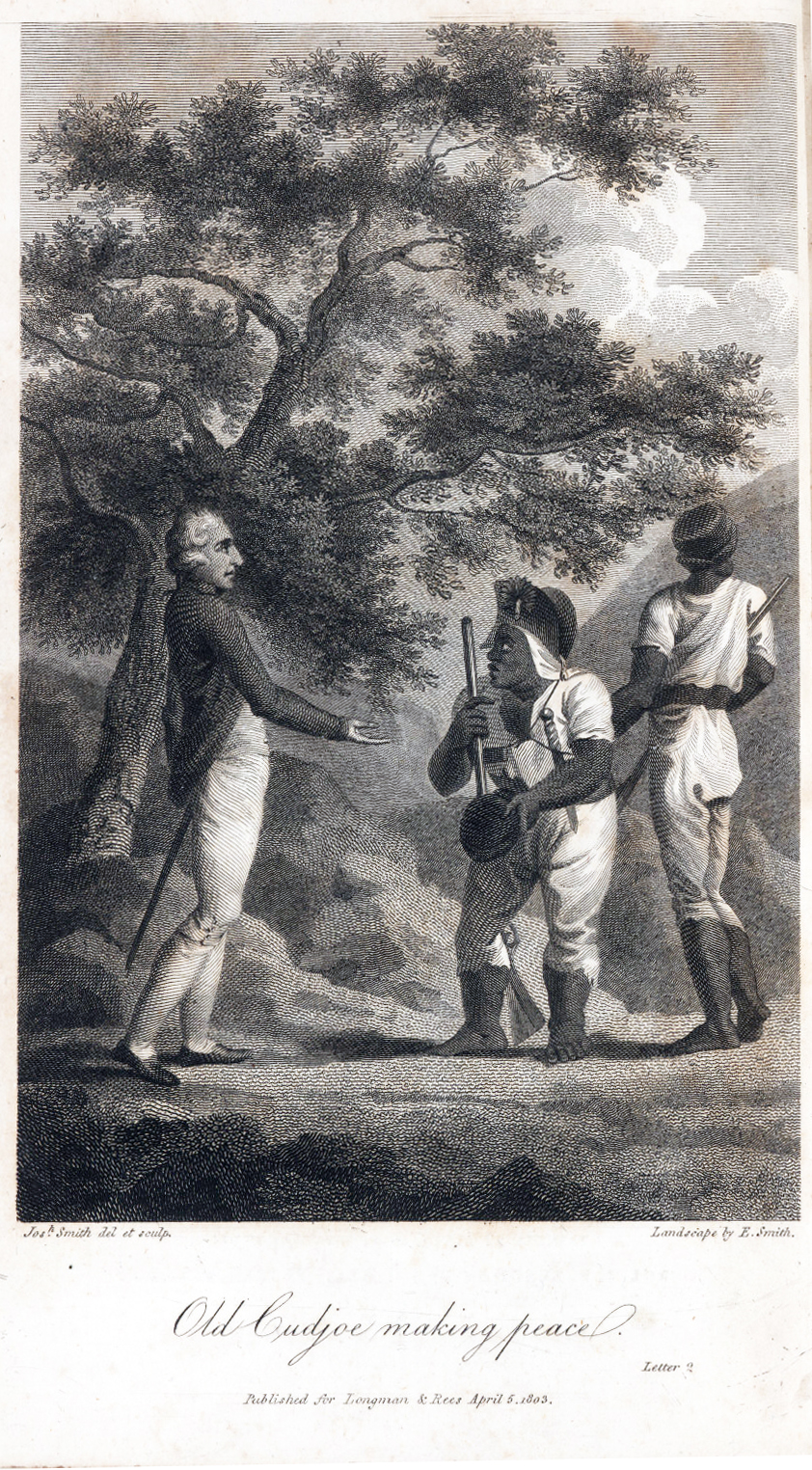 ©John Carter Brown Library. From The History of the Maroons by Robert Charles Dallas. Printed by A Strahan, Printers-Street, for T. N. Longman and O. Rees, Paternoster-Row, London 1802

Their numbers were augmented by more than 300 Koramantees, brought to the island by the English, who rebelled in 1673 and fled to the interior. Then, in 1690, 400 slaves from an estate in Clarendon rebelled and joined the runaways. The Maroons continued to raid English plantations and settlements well into the 18th century. Planters lived in a state of mental and physical siege. One wrote: “Murders were daily committed, plantations burnt and deserted, every person settled near the mountains in dread of the rebels and mutinies in their own plantations.”

Finally, after numerous failed attempts to defeat them – more than £100,000 was spent on military activity between 1730 and 1734 – the English offered a peace treaty. The treaty gave the Maroons their freedom and their own land but the insertion of the clause requiring them to act as a kind of mountain police force, returning all runaways to their masters, created a deep psychological scar in black Jamaican society.

In the name of God, Amen. Whereas Captain Cudjoe, Captain Acompong, Captain Johnny, Captain Cuffee, Captain Quaco, and several other Negroes, their dependants and adherents, have been in a state of way and hostility, for several years past, against our sovereign lord the King, and the inhabitants of this island: and whereas peace and friendship among mankind and the preventing the effusion of blood, is agreeable To God, consonant to reason, and desired by every good man; and whereas his Majesty George the Second, King of Great Britain. France, and Ireland, and of Jamaica Lord Defender of the Faith, &c. has by his letters patent, dated February the twenty-fourth, one thousand seven hundred and thirty-eight, in the twelfth year of his reign, granted full power and authority to John Guthrie and Francis Sadler Esquires, to negotiate and finally conclude a treaty of peace and friendship with the aforesaid Captain Cudjoe, and the rest of his captains, adherents, and others his men; they mutually, sincerely, and amicably, have agreed to the following articles:

First, That all hostilities shall cease on both sides for ever. Secondly, That said Captain Cudjoe, the rest of his captains, adherents, and men, shall be for ever hereafter in a perfect state of freedom and liberty. Excepting those who have been taken by them, or fled to them, within two years last past, if such are willing to return to their said masters and owners, with full pardon and indemnity from their said masters or owners for what is past; provided always that, if they are not willing to return, they shall remain in subjection to Captain Cudjoe and in friendship with us, according to the form and tenor of this treaty.

Thirdly, That they shall enjoy and possess for themselves and posterity for ever, all the lands situate and lying between Trelawney Town and the Cockpits, to the amount of fifteen hundred acres, bearing northwest from the said Trelawney Town.

Fourthly, That they shall have liberty to plant the said lands with coffee, cocoa, ginger, tobacco, and cotton, and to breed cattle, hogs, goats, or any other stock, and dispose of the produce or increase of the said commodities to the inhabitants of this island; provided always, that when they bring the said commodities to market, they shall apply first to the custos, or any other magistrate of the respective parishes where they expose their goods to sale, for a licence to vend the same.

Fifthly, That Captain Cudjoe, and all the captain’s adherents, and people now in subjection to him. Shall all live together within the bounds of Trelawney Town, and that they have liberty to hunt where they shall think fit, except within three miles of any settlement, crawl or pen; provided always, that in case the hunters of Captain Cudjoe and those of other settlements meet, then the hogs be equally divided between both parties.

Sixthly, That the said Captain Cudjoe, and his successors, do use their best endeavours to take, kill, suppress, or destroy, either by themselves, or jointly with any other number of men, commanded on that service by his excellency the Governor, or Commander in Chief for the time being, all rebels wheresover they be, throughout this island, unless they submit to the same terms of accommodation granted to Captain Cudjoe and his successors. Seventhly, That in case this island be invaded by any foreign enemy, the said Captain Cudjoe, and his successors herinafter named or to be appointed, shall then, upon notice given, immediately repair to any place the Governor for the time being shall appoint, in order to repel the said invaders with his or their utmost force, and to submit to the orders of the Commander in Chief on that occasion.

Eighthly, That if any white man shall do any manner of injury to Captain Cudjoe, his successors, or any of his or their people, they shall apply to any commanding officer or magistrate in the neighbourhood for justice; and in case Captain Cudjoe or any of his people, shall do any injury to any white person, he shall submit himself, or deliver up such offenders to justice.

Ninthly, That if any negroes shall hereafter run away from their masters or owners, and fall into Captain Cudjoe’s hands, they shall immediately be sent back to the chief magistrate of the next parish where they are taken; and those that bring them are to be satisfied for their trouble, as the legislature shall appoint.*

Tenthly, That all negroes taken since the raising of this party by Captain Cudjoe’s people, shall immediately be returned.

Eleventhly, That Captain Cudjoe, and his successors, shall wait on his Excellency, or the Commander in Chief for the time being, every year, if thereunto required.

Twelfth, That Captain Cudjoe, during his life, and the captains succeeding him, shall have full power to inflict any punishment they think proper for crimes committed by their men among themselves, death only excepted; in which case, if the Captain thinks they deserve death, he shall be obliged to bring them before any justice of the peace, who shall order proceedings on their trial equal to those of other free negroes.

Thirteenth, That Captain Cudjoe, with his people, shall cut, clear, and keep open large and convenient roads from Trelawney Town to Westmorland and St James’s, and if possible to St Elizabeth’s.

Fourteenth, That two white men, to be nominated by his Excellency, or the Commander in Chief for the time being, shall constantly live and reside with Captain Cudjoe and his successors, in order to maintain a friendly correspondence with the inhabitants of this island.

Fifteenth, That Captain Cudjoe shall, during his life, be Chief Commander in Trelawney Town; after his decease the command to devolve on his brother Captain Accompong; and in case of his decease, on his next brother Captain Johnny; and failing him, Captain Cuffee shall succeed; who is to be succeeded by Captain Quaco; and after all these demises, the Governor, or Commander in Chief for the time being, shall appoint, from time to time, whom he thinks fit for that command.

* The Assembly granted a premium of thirty shillings for each fugitive slave returned to his owner by the Maroons, besides expenses.