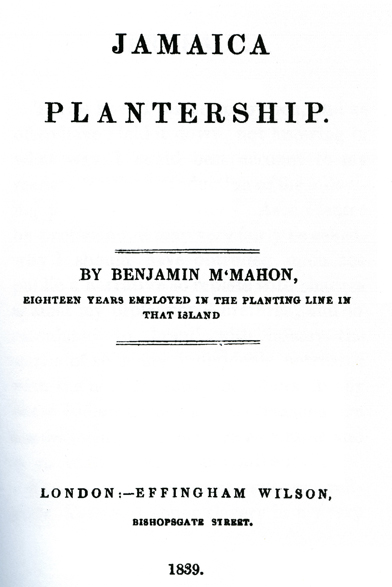 Crawle Estate. On the 20th of July, 1822, I was employed on this estate by Mr. Ralph Cocking, the overseer. He was a young man, very plausible and cunning, and ready to do any thing to get into favour with his employers. He was very ambitious, and ready to make any sacrifices to accomplish his aim. He was a cruel tyrant to the poor slaves; he flogged without mercy, and was unkind and unfeeling to them in every respect. The only good point I ever saw in Mr. Cocking was that he was liberal to his book-keepers, at table. My employment during the week was so incessant, that I had not as much time as would enable me to reckon my clothes to the washerwoman. The negroes were in a state of great debility from cruel oppressions; the only strong and active man was the driver (John Clark), a powerful and muscular fellow, whose savage barbarity over the rest was terrifying.

I remember on one occasion Mr. Cocking found fault with this driver for not having forced enough of work out of the gang, and laid him down and gave him a severe flogging, which obliged him to go to the pond, to wash off the blood. After it was over, he said, “Never mind, I don’t blame busha for this; but I will know what to do— I’m not going to take lick for all the gang in this way, and I don’t care what I do, — I will cut and chop away right and left.” He went to the field, and took ample revenge on the poor slaves— flogging them all round till night; he wore out three different lashes on his whip; he literally cut the clothes on their backs, and slashed the arms, necks, and faces of several young females, who dared not complain: the man, in fact, worked himself up to frenzy, and I dared not interfere, or I should have had my discharge, and the slaves dared not complain, for fear of another punishment instead of redress.

On the following morning, several of these unfortunate people went to the hospital with fever, and many were entirely lame and unable to walk, and although the property lost the benefit of these people’s labour for several days, yet this was good management! I saw plainly enough that this estate was ruined and could not last long, and accordingly I find that it has since been sold and broken up. Mr Ralph Cocking is now a special magistrate, but I have had no opportunity of seeing how he has conducted himself in that capacity; from what I know of his unmerciful disposition, and his deceit and hypocrisy, I cannot think that his principles are changed, and I am sure that the negroes can never have the least confidence in him. No planter ought ever to have been made a special magistrate — they can never forget their old habits.

Harmony Hall: Mr Adam Steel, the proprietor of an extensive jobbing gang, induced me to leave Crawle estate, to take charge of his gang as overseer, as I had a good reputation for industry and attention to business. I accepted his offer. His gang was employed in jobbing on estates in that and the neighbouring parishes. They were a fine effective set of people, whom he had picked and selected by various crafty means.

Before I had been two months in his employ, I found out that he was a dangerous character to have any dealings with — a man totally without principle, either of honesty or honour: as to humanity or morality, that was out of the question. Besides having his own property and gang, he was overseer of Byndloss estate, which enabled him to plunder on a very extensive scale. He stole timber from his neighbours’ woods by moonlight* using Byndloss steers for the purpose, and in this way he built his house on Harmony Hall. He was an expert hand at converting a deed of sale into a deed of gift to his own advantage, and there was no villainy that he was not capable of acting. Females at the age of ten and eleven fell victims to his brutal lust, and if ever he heard of any of the negro men at all interfering with any of the women he had once cast his eye upon, the cruel butchery that followed was sufficient to strike terror into their hearts.

I was present on the following occasion, and can speak from personal observation:— Steel was living in the fashion of the country, with a free woman of colour, named Miss Marshall. She owned a young brown slave girl, named Sarah, about 14 or 15 years of age, who was a great favourite of her mistress. Steel, it appeared, was constantly trying to seduce this poor creature. Miss Marshall became jealous, and vented her spleen upon the girl and one day accused her of being impudent to her, which, in her jealousy, she imputed to Steel’s improper attentions to her, and at the same time threatened the girl that she would make Mr. Steel give her a flogging.

Steel overheard all this, and determined to revenge himself, both on the girl and Miss Marshall. He called out, “I’ll take care you two shall have no more quarrels about me.” He sent for the driver, John Taylor, and four able people; poor Sarah was dragged out to the terrace in front of the house; Steel took his chair out, and sat down, so that he might not be tired during the prolonged punishment he designed to inflict. The girl was stretched out, and her body laid bare.

I shall never forget the sight, she was a most beautiful creature, the picture of symmetry; her skin like velvet, without a mark upon it — alas! so soon to be disfigured by the horrid lacerations of the whip. The punishment commenced at half-past four and was not finished till six o’clock, during which time the driver had to stop three different times to put new lashes to his whip.

When first the flogging began, the girl gave the most piercing shrieks I ever heard from a human being, and continued shrieking until entirely exhausted; she then lay writhing and shuddering, giving a dreadful groan at each lash — still the horrid whip went on – she was covered with blood — her body from the shoulders to the thighs, was one frightful mass of mangled flesh. In the midst of this, I saw the suffering girl raise her head — her eyes glared wildly-she was panting, or gasping for breath —and in a broken voice scarcely audible, she cried, “Water! water! water!” Her appearance was awful — I thought she was dying— I was sick at heart— I could bear no more, and rushed into the plantain walk to get out of sight and hearing of the murderous work. I had then counted upwards of 300 lashes.

Previous to this I had applied to Steel to stop the punishment, but he told me to go and mind my own business, as I had nothing to do with the quarrels between Miss Marshall’s people and himself. Miss Marshall herself, three times during the punishment, went and entreated him not to murder the poor girl; but it was of no use, he swore the most dreadful oaths, and made use of the foulest and most obscene language his tongue could utter. He did not care if she died on the spot.

At last Miss Marshall, in a distracted state, ran to the back part of the house into the plantain walk, wringing her hands, and calling out, “Mr. Steel has murdered my poor slave —poor Sarah’s killed.” Steel at length was satisfied – He had glutted his vengeance on his helpless victim — she was carried away, and I saw no more of her. I left Steel’s employ soon after, and the next time I visited the parish, on inquiring after poor Sarah, I learned that, shortly after I left the place, poor Sarah was laid in a cold grave. This murder took place close to the residence of two magistrates, but, as they were perhaps doing quite as bad themselves no notice was taken of this.