Frederick Douglass on the book that changed his life 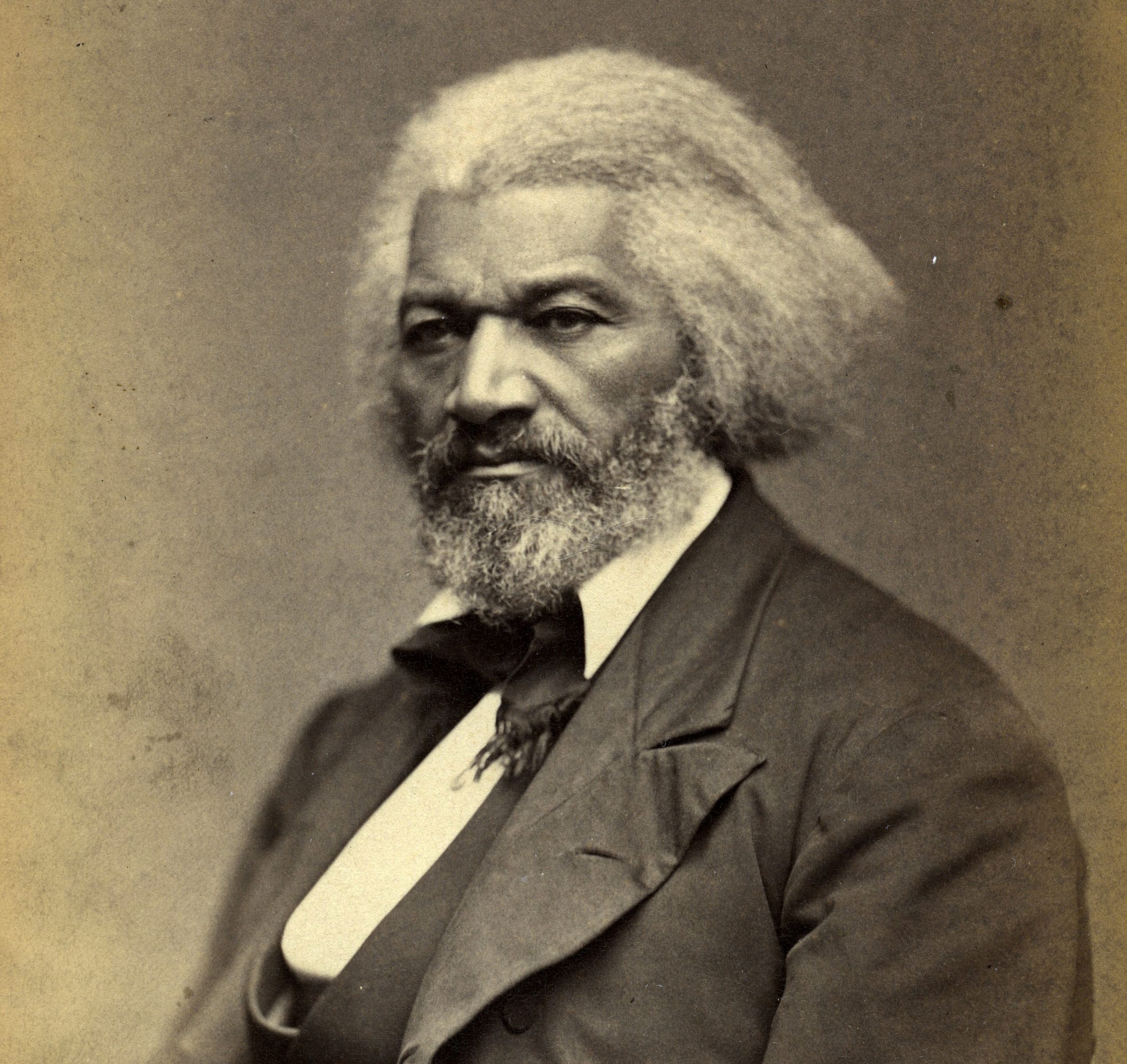 frederick douglass in 1879. photograph courtesy of US National archives

ON September 3, 1838, the enslaved man who became the most famous social reformer and abolitionist in American history set off on his escape to freedom. Frederick Douglass, dressed as a sailor and carrying forged identification papers, fled Maryland for New York with his few possessions, which included the book The Columbian Orator. (1)

Over the following 50 years, Douglass became a national leader of the abolitionist movement in Massachusetts and New York and an internationally acknowledged champion of equality and human rights. Throughout, he consistently paid tribute to the influence of The Columbian Orator. He described the book as an intellectual turning point that liberated him from the mental shackles of slavery. In his Narrative of the Life of Frederick Douglass, an American Slave published in 1845, he recounts how he was taught to read and how he sometimes felt that this had been a curse rather than a blessing.

“I was now about twelve years old, and the thought of being a slave for life began to bear heavily upon my heart. Just about this time, I got hold of a book entitled The Columbian Orator. Every opportunity I got, I used to read this book. Among much of other interesting matter, I found in it a dialogue between a master and his slave. The slave was represented as having run away from his master three times. The dialogue represented the conversation which took place between them, when the slave was retaken the third time. In this dialogue, the whole argument on behalf of slavery was brought forward by the master, all of which was disposed of by the slave. The slave was made to say some very smart as well as impressive things in reply to his master — things which had the desired though unexpected effect; for the conversation resulted in the voluntary emancipation of the slave on the part of the master.

“In the same book, I met with one of Sheridan’s mighty speeches on and in behalf of Catholic emancipation. These were choice documents to me. I read them over and over again with unabated interest. They gave tongue to interesting thoughts of my own soul, which had frequently flashed through my mind, and died away for want of utterance. The moral which I gained from the dialogue was the power of truth over the conscience of even a slaveholder. What I got from Sheridan was a bold denunciation of slavery, and a powerful vindication of human rights. The reading of these documents enabled me to utter my thoughts, and to meet the arguments brought forward to sustain slavery; but while they relieved me of one difficulty, they brought on another even more painful than the one of which I was relieved. The more I read, the more I was led to abhor and detest my enslavers. I could regard them in no other light than a band of successful robbers, who had left their homes, and gone to Africa, and stolen us from our homes, and in a strange land reduced us to slavery. I loathed them as being the meanest as well as the most wicked of men. As I read and contemplated the subject, behold! that very discontentment which Master Hugh had predicted would follow my learning to read had already come, to torment and sting my soul to unutterable anguish. As I writhed under it, I would at times feel that learning to read had been a curse rather than a blessing. It had given me a view of my wretched condition, without the remedy. It opened my eyes to the horrible pit, but to no ladder upon which to get out. In moments of agony, I envied my fellow-slaves for their stupidity. I have often wished myself a beast. I preferred the condition of the meanest reptile to my own. Any thing, no matter what, to get rid of thinking! It was this everlasting thinking of my condition that tormented me. There was no getting rid of it. It was pressed upon me by every object within sight or hearing, animate or inanimate. The silver trump of freedom had roused my soul to eternal wakefulness. Freedom now appeared, to disappear no more forever. It was heard in every sound, and seen in every thing. It was ever present to torment me with a sense of my wretched condition. I saw nothing without seeing it, I heard nothing without hearing it, and felt nothing without feeling it. It looked from every star, it smiled in every calm, breathed in every wind, and moved in every storm.

“I often found myself regretting my own existence, and wishing myself dead; and but for the hope of being free, I have no doubt but that I should have killed myself, or done something for which I should have been killed. While in this state of mind, I was eager to hear any one speak of slavery. I was a ready listener. Every little while, I could hear something about the abolitionists. It was some time before I found what the word meant. It was always used in such connections as to make it an interesting word to me. If a slave ran away and succeeded in getting clear, or if a slave killed his master, set fire to a barn, or did any thing very wrong in the mind of a slaveholder, it was spoken of as the fruit of abolition. Hearing the word in this connection very often, I set about learning what it meant. The dictionary afforded me little or no help. I found it was “the act of abolishing;” but then I did not know what was to be abolished. Here I was perplexed. I did not dare to ask any one about its meaning, for I was satisfied that it was something they wanted me to know very little about. After a patient waiting, I got one of our city papers, containing an account of the number of petitions from the north, praying for the abolition of slavery in the District of Columbia, and of the slave trade between the States. From this time I understood the words abolition and abolitionist, and always drew near when that word was spoken, expecting to hear something of importance to myself and fellow slaves.

“The light broke in upon me by degrees. I went one day down on the wharf of Mr Waters; and seeing two Irishmen unloading a scow of stone, I went, unasked, and helped them. When we had finished, one of them came to me and asked me if I were a slave. I told him I was. He asked, “Are ye a slave for life?” I told him that I was. The good Irishman seemed to be deeply affected by the statement. He said to the other that it was a pity so fine a little fellow as myself should be a slave for life. He said it was a shame to hold me. They both advised me to run away to the north; that I should find friends there, and that I should be free. I pretended not to be interested in what they said, and treated them as if I did not understand them; for I feared they might be treacherous. White men have been known to encourage slaves to escape, and then, to get the reward, catch them and return them to their masters. I was afraid that these seemingly good men might use me so; but I nevertheless remembered their advice, and from that time I resolved to run away. I looked forward to a time at which it would be safe for me to escape. I was too young to think of doing so immediately; besides, I wished to learn how to write, as I might have occasion to write my own pass. I consoled myself with the hope that I should one day find a good chance. Meanwhile, I would learn to write.

“The idea as to how I might learn to write was suggested to me by being in Durgin and Bailey’s ship-yard, and frequently seeing the ship carpenters, after hewing, and getting a piece of timber ready for use, write on the timber the name of that part of the ship for which it was intended. When a piece of timber was intended for the larboard side, it would be marked thus—“L.” When a piece was for the starboard side, it would be marked thus—“S.” A piece for the larboard side forward, would be marked thus—“L. F.” When a piece was for starboard side forward, it would be marked thus—“S. F.” For larboard aft, it would be marked thus—“L. A.” For starboard aft, it would be marked thus—“S. A.” I soon learned the names of these letters, and for what they were intended when placed upon a piece of timber in the shipyard. I immediately commenced copying them, and in a short time was able to make the four letters named. After that, when I met with any boy who I knew could write, I would tell him I could write as well as he. The next word would be, “I don’t believe you. Let me see you try it.” I would then make the letters which I had been so fortunate as to learn, and ask him to beat that. In this way I got a good many lessons in writing, which it is quite possible I should never have gotten in any other way. During this time, my copybook was the board fence, brick wall, and pavement; my pen and ink was a lump of chalk. With these, I learned mainly how to write. I then commenced and continued copying the Italics in Webster’s Spelling Book, until I could make them all without looking on the book. By this time, my little Master Thomas had gone to school, and learned how to write, and had written over a number of copybooks. These had been brought home, and shown to some of our near neighbours, and then laid aside. My mistress used to go to class meeting at the Wilk Street meetinghouse every Monday afternoon, and leave me to take care of the house. When left thus, I used to spend the time in writing in the spaces left in Master Thomas’s copybook, copying what he had written. I continued to do this until I could write a hand very similar to that of Master Thomas. Thus, after a long, tedious effort for years, I finally succeeded in learning how to write.”

(1) The Columbian Orator was a collection of political writings, published in 1797, and edited by Caleb Bingham, a devout Congregationalist and New England educational reformer. Politically, Bingham was a supporter of Thomas Jefferson and he shared the Democratic Republican party’s enthusiasm for the French Revolution and the universal rights of man. He displayed a life-long sympathy to Native Americans and opened the first private school for women in Boston. In its time, TheColumbian Orator was so popular that it went through 23 editions. Consisting of 84 short selections of inspiring political speeches, poems, and dialogues, it included such diverse authors as Socrates, Philo, John Milton, Cicero, Benjamin Franklin, and George Washington. Though supportive of the ideals of the French Revolution, it also included British statesmen who were sympathetic to the colonies and the cause of human rights, some of whom made a lasting impression on Douglass. Its pedagogical intent was to prepare the youth of the revolutionary generation for the responsibilities of republican citizenship. In so doing, it united a concern for both elocution style and moral substance.