Lady Nugent dances with a negro, shocks her hosts and prompts fears of a rebellion 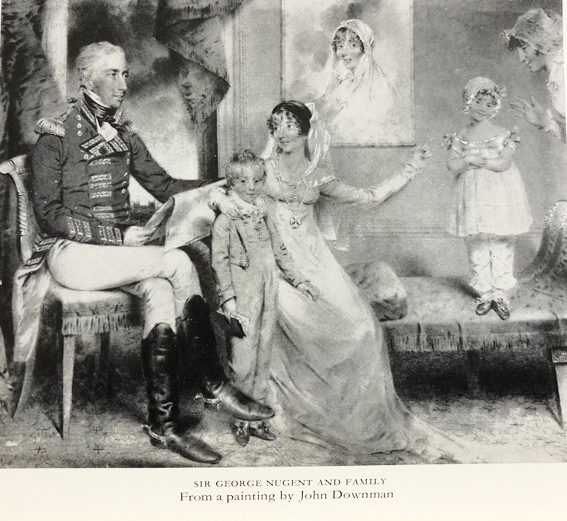 Sir George and Lady Nugent with their children, from a painting by John Downman

LADY NUGENT throws a fete for her servants and begins the ball by dancing with an old black servant which causes consternation amongst her white ladies in waiting who fear that such familiarity might breed rebellion.

A note from my dear N. to say that he will certainly be at home by 7 or 8 this evening. Order the servants a fete in consequence, and, with the assistance of the Misses Murphy, make all my preparations in the best manner. Dined with the gentlemen of the family, before 3, and immediately after take our stations in the piazza, to see the blackies enjoy themselves.

A long table was spread on the green, with all their most favourite dishes, of barbecued hog, jerked hog, pepper-pot, yams, plantains, &c. There were tubs of punch, and each of them had three glasses of Madeira, to drink three toasts – “Massa Gubernor, and Missis, and little Massa” – all of which were drank with three times three, by the men, women and children, and their sweethearts. The little children were all allowed a little sip, out of the grown up people’s glasses.

As soon as that ceremony was over, I began the ball with an old negro man. The gentlemen each selected a partner, according to rank, by age or service, and we all danced. However, I was not aware how much I shocked the Misses Murphy by doing this; for I did exactly the same as I would have done at a servants’ hall birthday in England.

They told me, afterwards, that they were nearly fainting, and could hardly forbear shedding a flood of tears, at such an unusual and extraordinary sight; for in this country, and among slaves, it was necessary to keep up so much more distant respect! They may be right. I meant nothing wrong, and all the poor creatures seemed so delighted, and so much pleased, that I could scarcely repent it. I was, nevertheless, very sorry to have hurt their feelings, and particularly too as they seemed to think the example dangerous; as making the blacks of too much consequence, or putting them at all on a footing with the whites, they said, might make a serious change in their conduct, and even produce a rebellion in the island.