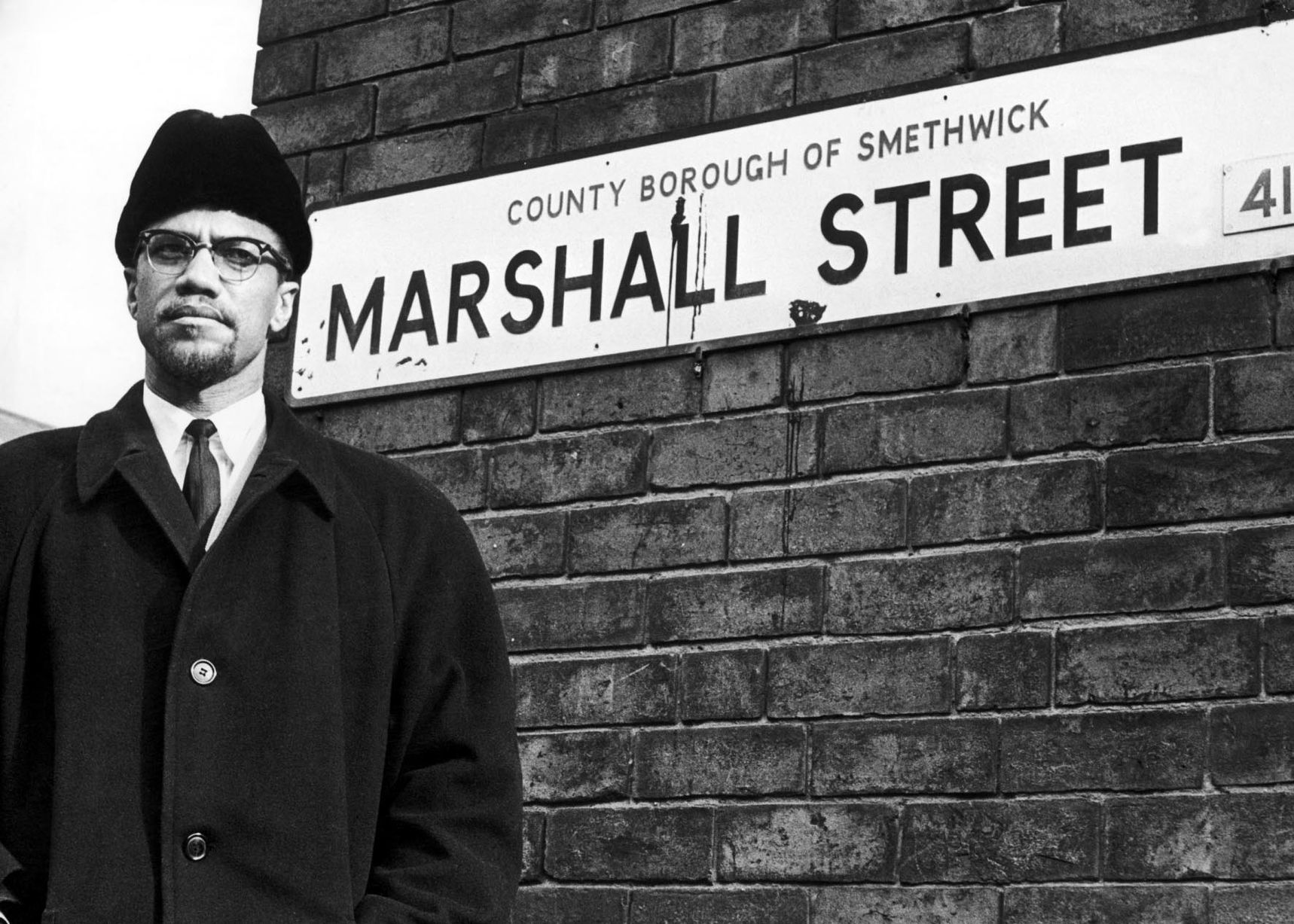 Malcolm X in Marshall Street, Smethwick where the local council was buying up houses in order to prevent back and asian families from moving into the area

Smethwick, which butts up against Birmingham’s north west city boundary, had witnessed one of the most notorious and unpleasant election campaigns during the 1964 General Election when Peter Griffiths, the victorious Conservative candidate, ran on a racist, anti-immigration platform. He proposed banning all immigration from the Caribbean and the Indian sub continent for a minimum of five years and supported the council’s efforts to segregate housing.

And that was how Malcolm X found himself walking along Marshall Street, which had become a battleground in the fight against discrimination. The Conservative council had supported a demand from white racists to buy any house that was put up for sale in order to stop non-whites moving in.

Malcolm had arrived in England from France (where he had been deported as an undesirable person) to fulfil a speaking engagement at the London School of Economics. The IWA, under the leadership of Avtar Singh Jouhl, seized the opportunity to invite him to speak at Birmingham University and to visit Smethwick.

Malcolm X’s visit was the only time he mixed with working class black people in Britain. He said: “I was in Birmingham, Alabama, the other day. This will give me a chance to see if Birmingham, England, is any different.”

Avtar walked round Smethwick with Malcolm, “But Malcolm wanted to walk on Marshall Street alone. He told us he was disgusted by what he had seen. He said it was worse than some parts of the US.”

Avtar said that it was fascinating to talk to him after he had visited Mecca and gone on to meet world leaders such as Julius Nyerere.

“He was moving away from the racial exclusivity of the Nation of Islam towards Marxist ideology. He said he was travelling to get more information and more education on the structure of how imperialism works. There was a big revolution going with his thinking. He was challenging all racism. He was not just interested in people of African heritage. If that was true, he wouldn’t have come to Smethwick, where almost all of the focus was on Asians.”

After looking at Marshall Street – at the far end of the street, a group of white women shouted abuse at him but he did not respond to them – he calmly walked back to where we were standing, recalls Avtar.

The IWA took Malcolm to experience the colour bar in local pubs. Avtar said: “He told us he was shocked that an open colour bar existed in Britain. By that time it was not legal in the US.”

When Malcolm X and Jouhl entered the smoke room of the Blue Gates pub with IWA members, they were told that they had to buy their drinks elsewhere because they were black.

“Malcolm shook the hand of every person of colour who was there. He kept his calm, but he was disgusted with what he saw at Marshall Street and the Blue Gate Pub.”

“Malcolm’s visit was a game-changer,” said Avtar. It helped change the atmosphere for people resisting racism around Smethwick. It was people gaining the confidence to fight back that started to shift things nationally. The Labour government passed the first Race Relations Act later in 1965—which outlawed discrimination in public places such as pubs.

By the 1966 election, anti-racist work on the ground affected the Labour Party. Labour candidate Andrew Faulds confronted Griffiths over racism and he won the seat back. Avtar adds: “The IWA devoted its energies to demonstrating that racism is a product of capitalism, and that the workers, no matter where they came from, shared common interests.”

Socialist Worker: When we invited Malcolm X to Smethwick https://socialistworker.co.uk/art/39954/When+we+invited+Malcolm+X+to+Smethwick