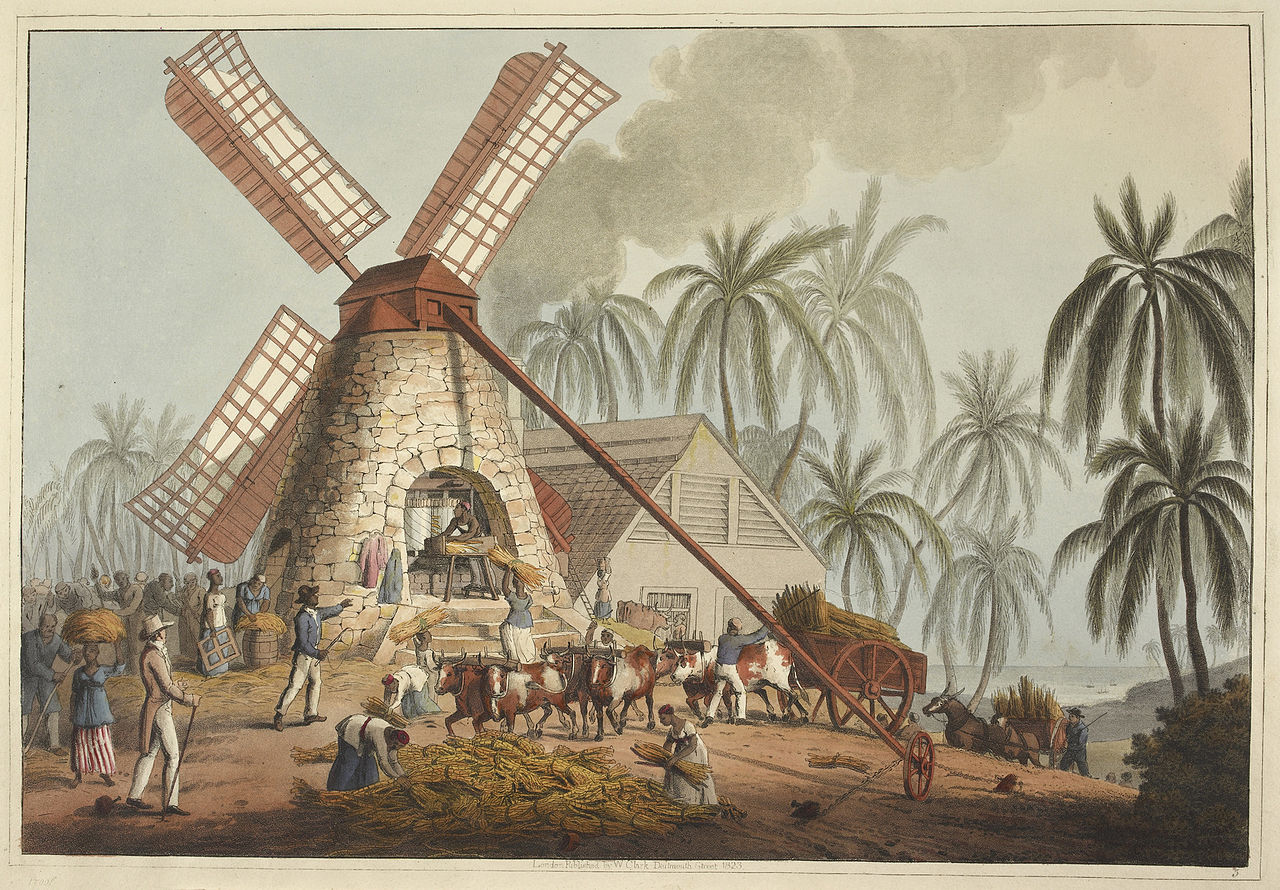 MATTHEW LEWIS is chiefly remembered as the author of the sensational Gothic novel The Monk, published in 1796. He was, however, a slave-owner and inherited two large plantations in Jamaica which he visited twice, in 1815 and 1817. His anecdotal record, Journal of a West Indian Proprietor, is full of vivid descriptions of plantation life – albeit from the perspective of a slave-owner.

“I saw the whole process of sugar-making this morning. The ripe canes are brought in bundles to the mill, where the cleanest of the women are appointed, one to put them into the machine for grinding them, and another to draw them out after the juice has been extracted, when she throws them into an opening in the floor close to her; another band of negroes collects them below, when, under the name of trash, they are carried away to serve for fuel. The juice which is itself at first of a pale ash-colour, gushes out in great streams, quite white with foam, and passes through a wooden gutter into the boiling-house, where it is received into the siphon or ‘cock copper’, where fire is applied to it, and it is slaked with lime (Calcium hydroxide), in order to make it granulate.

The feculent (Full of foul or impure matter) parts of it rise to the top, while the purer and more fluid flow through another gutter into the second copper. When little but the impure scum on the surface remains to be drawn on; the first gutter communicating with the copper is stopped, and the grosser parts are obliged to find a new course through another gutter, which conveys them to the distillery, when being mixed with the molasses, or treacle, they are manufactured into rum. From the second copper they are transmitted into the first and thence into two others, and in these four latter basins the scum is removed with skimmers pierced with holes, till it become sufficiently free from impurities to be skipped off, that is, to be again ladled out of the coppers and spread into the coolers, where it is left to granulate.

The sugar is then formed, and is removed into the curing-house, where it is put into hogsheads, and left to settle for certain time, during which those parts which are too poor and too liquid to granulate, drip from the casks into vessels placed beneath them: these drippings are the molasses, which, being carried into the distillery, and mixed with the coarser scum formerly mentioned form that mixture from which the spirituous liquor of sugar is afterwards produced by fermentation: when but once distilled, it is called ‘low wine’; and it is not till after it has gone through a second distillation, that it acquires the name of rum.

The ‘trash’ used for fuel consists of the empty canes, that which is employed for fodder and for thatching is furnished by the superabundant cane-tops; after so many have been set apart as are required for planting. After these original plants have been cut, their roots throw up suckers, which, in time, become canes, and are called ratoons: they are far inferior in juice to the planted canes; but then, on the other hand, they require much less weeding, and spare the negroes the only laborious part of the business of sugar-making, the digging holes for the plants; therefore, although an acre of ratoons will produce but one hogshead[1] of sugar, while an acre of plants will produce two, the superiority of the ratooned piece is very great, inasmuch as the saving of time and labour will enable the proprietor to cultivate five acres of rations in the same time with one of plants. Unluckily, after three crops, or five at the utmost, in general the ratoons are totally exhausted, and you are obliged to have recourse to fresh plants.

Last night a poor man, named Charles, who had been coachman to my uncle ages ago, was brought into the hospital, having missed a step in the boiling-house, and plunged his foot into the siphon: fortunately, the fire had not long been kindled, and though the liquor was hot enough to scald him, it was not sufficiently so to do him any material injury. The old man had presented himself to me on Saturday’s holiday (or play-day; in the negro dialect), and had shown me, with great exultation, the coat and waistcoat which had been the last present of his old massa. Charles is now my chief mason, and as one of the principal persons on the estate, was entitled, by old custom, to the compliment of a distinguishing dollar on my arrival: but at the same time that I gave him the dollar, to which his situation entitled him, I gave him another for himself, as a keepsake: he put it into the pocket of ‘his old massa’s’ waistcoat, and assured me that they should never again be separated. On hearing of his accident, I went over to the hospital to see that he was well taken care of; and immediately the poor fellow began talking to me about my grandfather, and his young massa, and the young missies, his sister and while I suffered him to chatter away for an hour, he totally forgot he pain of his burnt leg.

It was particularly agreeable to me to observe, on Saturday, as a proof of the good treatment which they had experienced, so many old servants of the family, many of whom had been born on the estate, and who, though turned of sixty and seventy, were still strong, healthy and cheerful. . . I find it quite impossible to resist the fascination of the conscious pleasure of pleasing: and my own heart, which I have so long been obliged to keep closed, seems to expand itself again in the sunshine of the kind looks and words which meet me at every turn, and seem to wait for mine as anxiously as if they were so many diamonds.”

From Journal of a West Indian Proprietor Kept during a Residence in the Island of Jamaica by Matthew Lewis, Oxford University Press.