Matthew Lewis on the cruellest proprietor that ever disgraced Jamaica 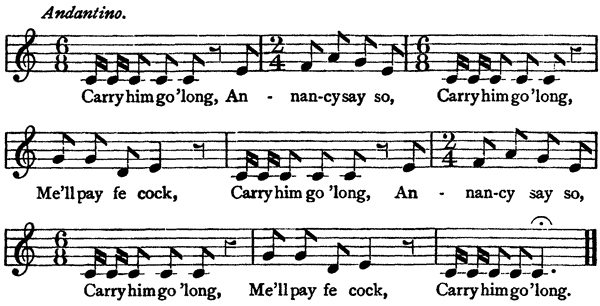 IN HIS Journal of a West Indian Proprietor Lewis recounts a notorious incident from 1788 when the owner of an adjacent estate ordered that a dying slave be carried to a gulley and left to die. The story became the subject of a popular song, Carry Him Along.

There is a popular negro song, the burden of which is,

This alludes to a transaction which took place some 30 years ago, on an estate in this neighbourhood, called Spring-Garden; the owner of which (I think the name was Bedward) (1) is quoted as the cruellest proprietor that ever disgraced Jamaica. It was his constant practice, whenever a sick negro was pronounced incurable, to order the poor wretch to be carried to a solitary vale upon his estate, called the Gulley, where he was thrown down, and abandoned to his fate; which fate was generally to be half devoured by the john-crows, before death had put an end to his sufferings. By this proceeding the avaricious owner avoided the expense of maintaining the slave during his last illness; and in order that he might be as little a loser as possible, he always enjoined the negro bearers of the dying man to strip him naked before leaving the Gulley, and not to forget to bring back his frock and the board on which he had been carried down.

One poor creature, while in the act of being removed, screamed out most piteously “that he was not dead yet” and implored not to be left to perish in the Gulley in a manner so horrible. His cries had no effect upon his master, but operated so forcibly on the less marble hearts of his fellow-slaves, that in the night some of them removed him back to the negro village privately, and nursed him there with so much care, that he recovered, and left the estate unquestioned and undiscovered.

Unluckily, one day the master was passing through Kingston, when, on turning the corner of a street suddenly, he found himself face to face with the negro, whom he had supposed long ago to have been picked to the bones in the Gulley of Spring-Garden. He immediately seized him, claimed him as his slave, and ordered his attendants to convey him to his house; but the fellow’s cries attracted a crowd round them, before he could be dragged away. He related his melancholy story, and the singular manner in which he had recovered his life and liberty; and the public indignation was so forcibly excited by the shocking tale, that Mr.Bedward was glad to save himself from being torn to pieces by a precipitate retreat from Kingston, and never ventured to advance his claim to the negro a second time.

(1) Lewis is mistaken. The proprietor’s name was Nathaniel Beckford. Sir George Nugent, the Governor of Jamaica, sought the removal of Nathaniel Beckford as a Member of the Council in 1804, citing his absence from duty for seven or eight years. Beckford reportedly returned the following year and was President of the Council in 1806. From Legacies of British Slave-ownership https://www.ucl.ac.uk/lbs/person/view/2146651333