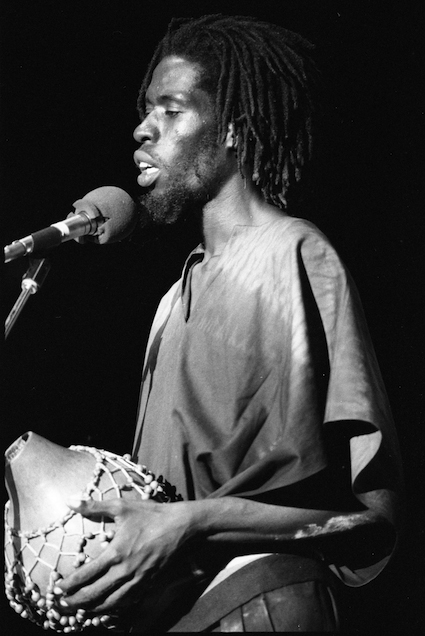 “MIKEY SMITH’s brutal murder on 17 August, 1983 robbed Jamaica of one of its most visionary and talented poets. His album Mi Cyaan Believe It is a classic, and in my opinion, one of the greatest reggae-dub poetry albums ever made.

I met Mikey in Kingston, a few months before his death, at a Jamaica National Dance Theatre Company performance of Rex Nettleford’s reggae ballet and again a few weeks later when he performed at Reggae Sunsplash. He was due to tour in the UK later that year and we arranged to meet in London.

Sadly it was not to be. At a political meeting in Stony Hill, on the outskirts of Kingston, he had heckled a Jamaica Labour Party cabinet minister. Walking in the vicinity the following day, he was confronted by three party activists. According to Jamaica’s Daily Gleaner of August 19 he was “hit on the head by a stone thrown by one of three men who had attacked him… An argument between Smith and the men at about 11 o’clock led to his death.”

Michael Smith – known universally as Mikey – was born in Kingston on 14 September, 1954. Writing about Mikey, the poet and writer Mervyn Morris said: “He came from a working class background: his father was a mason, his mother a factory worker.

He began writing poems in the late 1960s. The first success he recalled was a poem provoked by a news item about Ian Smith, Prime Minister of Rhodesia (which had just declared itself independent of the United Kingdom). ‘One morning me did get up and just see Smith Seh No To Black Majority Rule, and me just write a poem.’ The audience responded warmly when he read the poem at a Community Centre in Golden Spring.”

Mikey became a student at the Jamaica School of Drama, where he developed the breath control and deep resonances of his baritone voice that were to become one of the defining features of his performance style. By the end of the 1970s he was performing before large crowds at political and cultural events.

Linton Kwesi Johnson, who was instrumental in setting up the recording of his album, gives the following outline of Mikey’s international success. “In 1978 Michael Smith represented Jamaica at the eleventh World Festival of Youth and Students in Cuba. That year saw the release of his first recording, a twelve-inch forty-five titled Word accompanied by Count Ossie’s Mystic Revelation of Rastafari drummers. In 1981 Mikey performed in Barbados during Carifesta (a Caribbean regional cultural festival), and was filmed by BBC Television performing Mi Cyaan Believe It for the documentary From Brixton to Barbados. In 1982 Mikey took London by storm with performances at the Camden Centre during the International Book Fair of Radical, Black and Third World Books and also at the Lambeth Town Hall in Brixton for Creation for Liberation.

“Whilst in Britain, Mikey recorded a reggae album which Island Records released under the title Mi Cyaan Believe It. The story did not end there: the BBC’s Anthony Wall made a television programme about Mikey for the flagship arts series Arena. Entitled Upon Westminster Bridge, the programme was broadcast on BBC2 that year.”

The journalist and broadcaster Paul Bradshaw interviewed Mikey Smith for NME in October 1982. Many thanks to Paul for his kind permission to reproduce his article here.

THE sounds of Count Ossie and The Mystic Revelation of Rastafari rise and fall on the slight breeze across the Red Hills valley where Michael Smith sits in the shade, nursing a Red Stripe. He is tall, slim ‘n’ dread, with a distinctive limp and a serious expression which breaks often into a broad grin and wicked laughter.