Mungo Park: How I was saved by an African slave trader 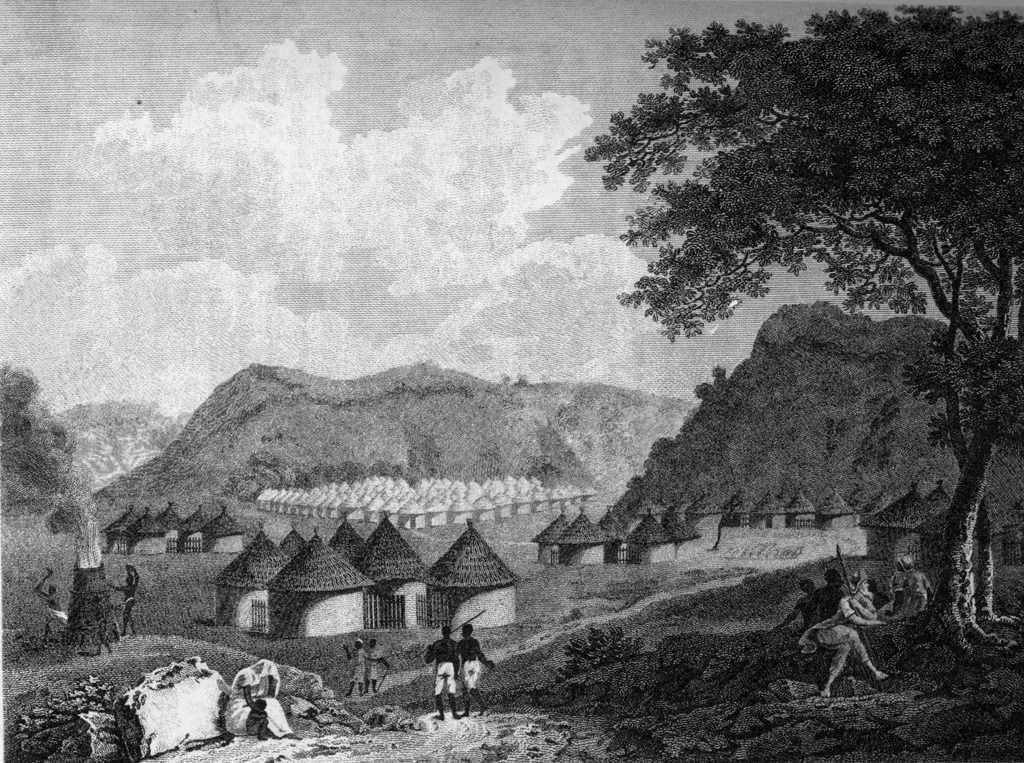 a view of kamalia

ALMOST a year into his journey, Park arrives in the town of Kamalia in a terrible state. Ravaged by fever, weak from hunger and with his clothes in rags, he is near death. He is received by a Muslim slave trader called Karfa Taura who offers him food and accommodation in return for the future payment of one slave.

On my arrival at Kamalia, I was conducted to the house of a Bushreen (Muslim) named Karfa Taura, the brother of him to whose hospitality I was indebted at Kinyeto. He was collecting a coffle of slaves, with a view to sell them to the Europeans on the Gambia, as soon as the rains should be over.

I found him sitting in his balloon (a room where strangers are housed), surrounded by several Slatees (free black merchants), who proposed to join the coffle. He was reading to them from an Arabic book, and inquired, with a smile, if I understood it? Being answered in the negative, he desired one of the Slatees to fetch the little curious book, which had been brought from the west country.

On opening this small volume, I was surprised and delighted to find it our Book of Common Prayer; and Karfa expressed great joy to hear that I could read it; for some of the Slatees, who had seen the Europeans upon the coast, observing the colour of my skin (which was now become very yellow from sickness) my long beard, ragged clothes, and extreme poverty, were unwilling to admit that I was a white man, and told Karfa, that they suspected I was some Arab in disguise.

Karfa, however, perceiving that I could read this book, had no doubt concerning me, and kindly promised me every assistance in his power. At the same time he informed me, that it was impossible to cross the Jallonka wilderness for many months yet to come, as no less than eight rapid rivers, he said, lay in the way.

He added, that he intended to set out himself for Gambia as soon as the rivers were fordable, and the grass burnt, and advised me to stay and accompany him. He remarked, that when a caravan of the natives could not travel through the country, it was idle for a single white man to attempt it. I readily admitted that such an attempt was an act of rashness; but I assured him that I had now no alternative, for having no money to support myself, I must either beg my subsistence, by travelling from place to place, or perish for want.

Karfa now looked at me with great earnestness, and inquired if I could eat the common victuals of the country — assuring me he had never before seen a white man. He added, that if I would remain with him until the rains were over, he would give me plenty of victuals in the meantime, and a hut to sleep in; and that after he had conducted me in safety to the Gambia, I might then make him what return I thought proper. I asked him if the value of one prime slave would satisfy him. He answered in the affirmative, and immediately ordered one of the huts to be swept for my accommodation.

Thus was I delivered by the friendly care of this benevolent Negro from a situation truly deplorable. Distress and famine pressed hard upon me; I had before me the gloomy wilds of Jallonkadoo, where the traveller sees no habitation for five successive days. I had observed at a distance the rapid course of the river Kokoro. I had almost marked out the place where I was doomed, I thought, to perish, when this friendly Negro stretched out his hospitable hand for my relief.

In the hut which was appropriated for me, I was provided with a mat to sleep on, an earthen jar for holding water, and a small calabash to drink out of; and Karfa sent me from his own dwelling two meals a day, and ordered his slaves to supply me with firewood and water.

But I found that neither the kindness of Karfa, nor any sort of accommodation, could put a stop to the fever which weakened me, and which became every day more alarming. I endeavoured as much as possible to conceal my distress; but on the third day after my arrival, as I was going with Karfa to visit some of his friends, I found myself so faint that I could scarcely walk, and before we reached the place, I staggered and fell into a pit from which the clay had been taken to build one of the huts.

Karfa endeavoured to console me with the hopes of a speedy recovery, assuring me, that if I would not walk out in the wet, I should soon be well. I determined to follow his advice, and confine myself to my hut; but was still tormented with the fever, and my health continued to be in a very precarious state for five ensuing weeks.

Sometimes I could crawl out of the hut, and sit a few hours in the open air; at other times I was unable to rise, and passed the lingering hours in a very gloomy and solitary manner. I was seldom visited by any person except my benevolent landlord, who came daily to inquire after my health.

When the rains became less frequent, and the country began to grow dry, the fever left me, but in so debilitated a condition that I could scarcely stand upright, and it was with great difficulty that I could carry my mat to the shade of a tamarind tree at a short distance, to enjoy the refreshing smell of the corn-fields, and delight my eyes with a prospect of the country.

I had the pleasure at length to find myself in a state of convalescence, towards which the benevolent and simple manners of the Negroes, and the perusal of Karfa’s little volume, greatly contributed.