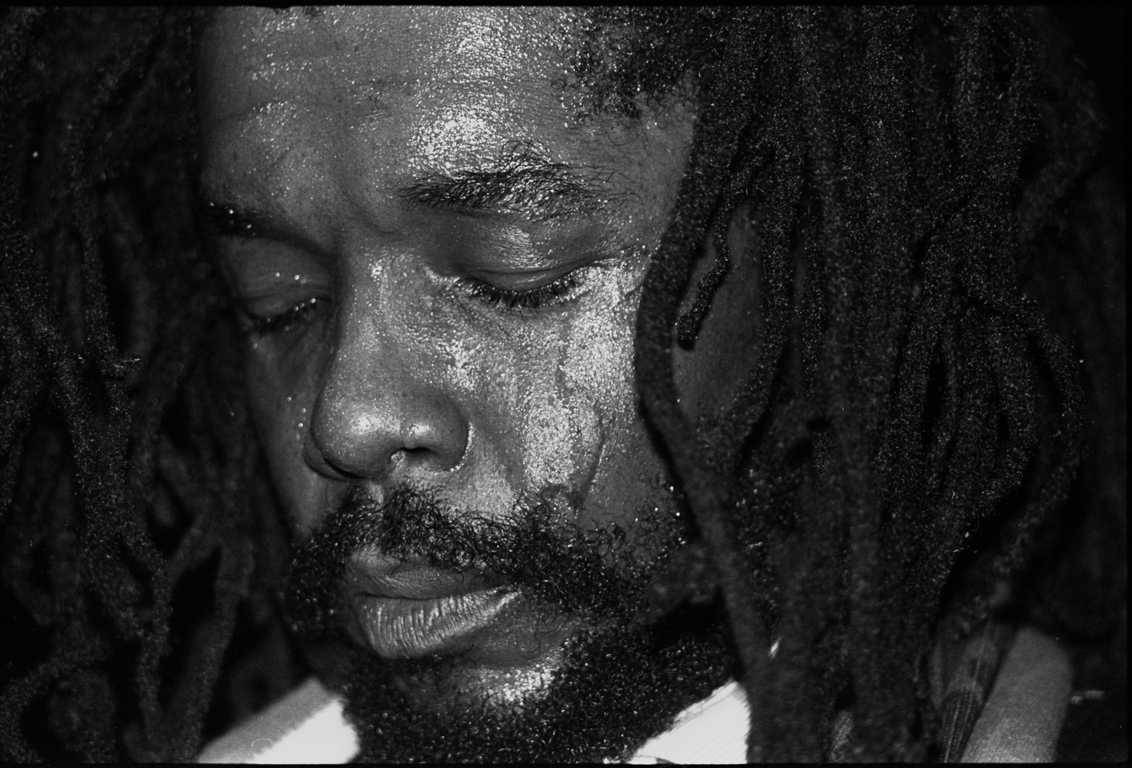 Peter Tosh performed for more than an hour, but almost half his performance was taken up with an infamous speech where he harangued the assembled politicians, rejecting the very premise of the occasion – “Peace is a diploma yu get de cemetery,” he observed. The transcript of his speech was published originally in the first edition of the famous Rasta magazine Jah Ugliman (October 1978). Karl Gayle, editor and founder of the magazine wrote about Tosh’s speech: “Well, I and I never ketch all a it still, but dis a wha’ Karl Pitterson did ave pon him tape as de official sound controller at de Peace Concert deh.”

Rachel Mordecai, Associate Professor at the University of Massachusetts Amherst, writes about Tosh’s performance at the concert: “Tosh points to the racial oppression, the cultural denigration of black people that has warped Jamaican society; more significantly, he identifies Jamaica as a black country that has been under the misrule of a racist ideology. This is Tosh’s claim for the fundamental blackness of the category ‘Jamaican’. In the early twenty- first century, it may seem unremarkable to refer to Jamaica as a black country. In 1978 it was perhaps becoming unremarkable, but, as Stuart Hall contends, ‘Black is an identity which had to be learned and could only be learned in a certain moment. In Jamaica that moment is the 1970s’ (Minimal Selves, University of Chicago Press P114-119). Tosh’s statement occurs in a time when calling Jamaica a black country was still polemical and when the question of a national racial identity was still a contested one, despite the multiracialist national motto, ‘Out of Many, one people’. The ideology of multiracialism has had equivocal success in Jamaica, some argue, because it has masked the bucky-massa bizniz that Tosh decries: a hierarchical multiracialism, in contrast to racial equality.”(1)

Peter Tosh: “Is word, sound and powa dat break down de barriers of oppression and drive away transgression and rule equality . . . Well, right now yu ave a system or a shitsystem whey gwaan inna dis country ya fe a long ages a times.

Dis concert here whey dem say is a peace concert, I man never did a go come unno. Yu know why? Cause wha, was a peace concert . . . And ah wonder if many people know what the word peace mean. Eeh? Yu see most intellectual people in society think the word peace mean ‘coming together’. Peace is de diploma you get in the cemetary, seen? On top of yu grave is marked: ‘Here lies the body of John Strokes, Rest in Peace. Seen?

An’ I know many of you likkle brothers wouldn’t like to hear yu dawters say she going to give away a little piece, a bongo clippins, yu no seen. So yu can imagine how defective peace is. Seen? Dis is a integration concert, seen? When black people come together an forget say well dere is a lotta destructive elements between I and I what segregate I and I, which was a force laid down by Lucifer, seen.

But know that I know dat Lucifer’s hand and foot will soon be bound, seen? And I shall cast him into outer darkness and bring love and justice to black people once more dat we long to hear a gun fire. We long to see one die, cause learn this man, white man teach I and I say; ‘I and I ha fe dead go a heaven’
Why? Dat them can come a Jamaica come tek whey de whole of the Sun, you no seen? And inherit the blood baat earth. And we gone away, heaven, gone drink milk and honey . . . cause we are what? Fools!

Dem tell we say ‘cow jump over moon and dish run away with bongo clippin spoon’ . . . Me a tell yu! Yu ever check dem thing, eh? That is to mek we gaze up there…Learn this man. Yu see dem likkle game here? Its just some games with Columbus and Henry Morgan and Francis Drake and Bartholemew DeLaCasa, who was the first guy come round here with cross round him neck, fe come trick black people and say, ‘well bwoi right now black people is Israel. If we want to hold dem, the only ting we can hold dem with is fe tell dem say, “See the cross here, and fe follow Jesus, him soon come back.”’ Look how bloodclaat long we deh ya a wait pon Jesus, eh? All now ’til bloodclaart. all the war in the earth, Jesus can’t do a thing about it, you no seen? And who have fe go an’ do that? It’s I and I have to come together with love . . . seen? Heartical love and respect for each other, yu no seen? Because dem little fuckery deh done with. . . yu no seen? Yes I!
And learn this man, we cyaan mek de likkle pirate dem come here. Me glad all de Prime minister is here, and the minister of opposishan, and ministers of Parliment are here. We cyaan mek de likkle pirate dem come here and rob up the resources of the country. Because that is what dem been doing a long, long bloodclaart time.

An ave poor people in ya blood claat bax shit out a hag mout. Yu no seen. Dem deh ting de fe dun. Seen. Caaz de Eart shook now. And Jamaica, learn dis man, Jamaica is one of the richest West Indies countries in de world, learn dat. Jamaica cyan feed de world with food. I see thousands of acres of land out there me coulda plant herb, and mek shipments of herb, a go and mek we cure glaucoma! So we don’t want dem deh bizniz dere! We want Equal Rights and what?

Yes, talking bout pirate, yu have all some likkle pirate now whey juss come from America all bout, wide dem camera and dem TV bizniz fe go do what? Get rich offa I and I, but hear me now man, Hoono make sure say Hoono come talk to I inno cause a lightning I flash . . .

Well right now Jamaica have been livin under dis colonial, imperialistic shituation for a long time, seen. Where irrespective of what goin on now and what government in powa, government ave to know dat yu ave whole lot of evil forces to fight who don’t like to see nuttin progressive, so learn dat. And de devil’s a dangerous guy, seen. And I hear hoonoo talk dis year is anti-apartheid year, what mean say black people muss be more aware an conscious of dem constitutional rights whey most black people, who is called de underprivileged, wha name so. Him a fe go aks someone who is privileged, yu no seen.

Well, right now yu see dis shystem ya, dis colonial shystem here . . . dis colonial shystem yaw ha rule de underprivilige sector. I am one of dem who happen to be in de underprivilige sector, yu no seen? Hassled by police brutality time and times again, ha fe run up and dung – fe what? Fe just have a likkle spliff inna me pocket, or have a round of herb, or a go buy a draw.

Yu go buy a draw yu have fe a tense and caak yu batty an all dem blood bath deh till yu come back because police good a back yu up, road block good a dung de road.

Well right now, as a man of powa and a ruler of dis likkle country here. Not you alone, Mister Seaga too. Because a so it go. We would like de members of Parliament muss come togeda, if hoonoo dealing wid de people and de sufferin class, caa police still out deh a brutalise poor people fe what? A likkle draw a herb, seen.

Every time me go to country me ha fe a fret till me reach back a my yard, fe buy a likkle draw a herb. An me personally, if it was fe alone every police station lack up an police go sleep a him yaad an hug up him wife. You no seen?

Me no waan nuttin fe teef. Me go tru de lowest degredation of humiliation an incrimination an brutality, an yet still I never bend my mind and say ‘Bwoi, mek I go try lick off de man deh shop door an see if ah hol something.’

Still I naw say my bredda is a criminal yunno. Learn dis, caa when Columbus an Henry Maagan and Francis Drake come on ya hoonoo call dem pirate and put dem inn me readin book and give us observation dat we muss look at an live de life an de principle of pirates. See de yout dem now a fiya up dem gun like Henry Maagan same way. Yu no seen. So dem deh shystem deh a fe change.

Mek me a tell yu something. In America, Germany, France. England, Italy, me go a de wol a dem place physically, mentally an spiritually, an yu know what me go deh go see? On every pack of cigarette is mark: ‘Waanin de sergen general warns dat cigarette smokin is dangerous a hazard to yu healt.’ Seen!

In a black man country22 dat no deh deh mek him gwaan some it an kill aff himself dat dem can get to inherit de Eart! Yu no seen, an we dead gaan a heaven, seen.

So if hoonoo waan go a heaven a fo hoonoo bizniz. I will be here a billion years. Well rite now, according to de shituation I man gwan livicate dis music here towards dose who get humiliated for a draw of herb, yu no seen.