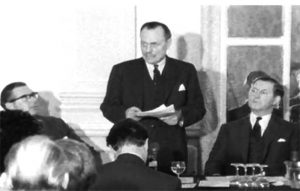 THIS is the full text of Enoch Powell’s speech delivered to a Conservative Association meeting at the Midland Hotel (later known as The Burlington Hotel) in New Street, Birmingham on April 20, 1968. The speech, criticising Commonwealth immigration and anti-discrimination legislation, was made prior to the second reading of the Labour government’s Race Relations Bill 1968. While Powell did not consider himself a racist, The Economist claimed in an editorial on the 50th anniversary of the speech that his rhetoric had a “lasting and malign effect … on the way in which race and migration are discussed, or not discussed.”