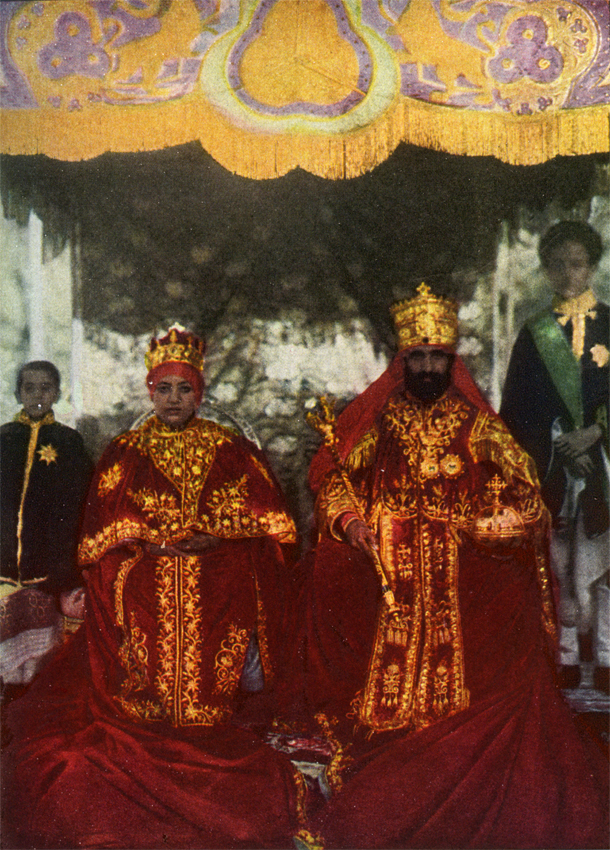 The newly-crowned monarchs of historic Ethiopia. The Emperor, Haile Selassie, the First, and the Empress Manen in their coronation robes. In the background stand the Crown Prince Isfao Wasen (right) and a younger son of their Majesties, Lidj Makonnen. Their Majesties also have three daughters. © National Geographic Society. Photo by W. Robert Moore

I take my official seat in the great Cathedral hall between two gaunt and venerable feudal chieftains. I know these bearded ‘greats’ to be from the more remote parts of the Empire because they wear the ancient style of lion’s mane regalia. Native leaders better accustomed to the capital have taken generally to the more prosaic uniform of Europe.

These lion’s-mane fellows are splendid to look at and most impressive in photographs, but rather difficult neighbours when one must sit for hours between two of them. The skin worn by one of this pair surely came from a particularly mature lion. Its bristles are so stiff that they not only tickle but prick my ear and cheek. The other pelt lacks olfactory appeal. But both add magnificently to the scenery.

I look immediately over the head of Italy’s Prince of Udine. Facing me across the open space before the twin thrones is a row of imposingly large and gilded chairs. The first seat holds a prince of England more than resplendent in his guardsman’s uniform. Next to him sits a prince of the ancient and royal line of Solomon; then a marshal of France, using his knee as a rest for his gold baton; a king of Tigre, an ambassador of Belgium, and so on.

Great and representative men from the Occident and from the Orient; bearded feudal chieftains from the north, the south, the east, and the west of this ancient Empire of Ethiopia – Christians and Moslems and many others are all gathered for the coronation of a new emperor, modern civilisation cheek by jowl with medievalism.

The studded doors of the Holy of Holies open ponderously. Through them rolls in giant and stirring hum, the seemingly far-off chant of hundreds of priests, probably exactly as it would have sounded on an Ethiopian coronation day a thousand and more years ago.

The Conquering Lion of the Tribe of Judah and his Empress have just completed a night of prayer and devotion at the most holy altar within. Preceded by waving incense-burners, His Majesty enters now the main part of the Cathedral and takes his throne.

The thrilling but solemn silence gently breaks to the throaty voice of His Holiness the Abuna Kyrillos: “Ye princes and ministers, ye nobles and chiefs of the army, ye soldiers and people of Ethiopia, and ye doctors and chiefs of the clergy, ye professors and priests, look ye upon our Emperor Haile Selassie the First, descended from the dynasty of Menelik the First, who was born of Solomon and the Queen of Sheba, a dynasty perpetuated without interruption from that time to King Sehalé Selassie and to our times.”

SEVEN SYMBOLS OF AWE AND MAJESTY ARE BESTOWED

For five hours then we witness the unfolding of the ancient and traditional Hebraic-Christian ceremony of the crowning of a ruler of the Empire of Ethiopia. Forty-nine bishops and priests of this ancient Christian country, in groups of seven, have held place for seven days and nights in the seven corners of this national cathedral to chant without ceasing nine Psalms of David. They are now joined by hundreds more. The established Coptic Church is revered and all-powerful in Ethiopia. This is a day when it may, and does, show its impressive might and splendour.

The Emperor, whose name may be Anglicised as ‘Power of the Trinity’, is vested first with his sword of gold studded with precious stones. Chanting and prayers to the God of Gods rise from a multitude of priestly throats and reverberate from the lofty ceiling of the Cathedral.

Bestowals of the imperial sceptre of ivory and gold and a golden globe of the earth follow.

The diamond-incrusted ring, the two traditional lances filigreed in gold and the imperial vestments are in turn with appropriate and lengthy ceremony. Seventh and last comes the magnificent crown.

Seven differently scented ointments of ancient prescription are received on the imperial head, brow and shoulders – one with each of these seven ornaments of the coronation.

After the completion of the coronation ceremonies for the Emperor, the Empress enters and takes her throne. She is crowned with less elaborate but always impressive rites, conducted also by the archbishop, his bishops and priests. The final ceremony is a grand tour of the Cathedral by Their Imperial Majesties. They are escorted by the bishops and priests, the princes and high dignitaries, assistants and others, carrying palm branches and chanting in mighty volume, “Blessed be the King of Israel.”

Shortly after noon the cannons boom. There is a fanfare of a thousand trumpets. The triumphant ululation of tens of thousands of waiting women is released in waves over the city of the ‘New Flower’.